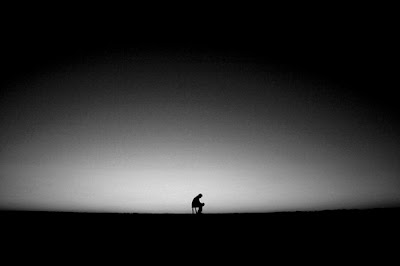 Loneliness is one of the more common themes in literature. Perhaps this has to do with the communion of author and readers, reader and characters, or readers and readers. Reading about a lonely character is like listening to songs about heartbreak right after yours has been broken... there is a fellowship of pain and it can be consoling to realize you are not the only one to feel like you are feeling, especially when that feeling involves intense isolation.

Of Mice and Men is a classic tale of loneliness. The men are forced, by the nature of their position in the society in which they live, to live lives that exacerbate loneliness. In their world, they are migrants, never having an established home, never holding a permanent job, always on the move, always having to rely on only one thing -- themselves. In fact, though they all long for the intimacy of a spouse or the listening ear of a constant companion, it is a risk to trust another. During times of societal recession, fear increases. When everyone is afraid of everyone else, being different becomes a handicap and trust becomes a weakness. At times in the novella, the loneliness becomes palpable enough to act as another character. When Candy's dog (his only companion) is taken out to be shot because the other ranchers view it as old and useless, the men lie on their bunks and the silence that is full of pain and loneliness arrives to keep them company.


It was silent outside. Carlson's footsteps trailed off. The silence came into the room. And the silence lasted.

George chuckled, "I bet Lennie's right out there in the barn with his pup. He won't want to come in here no more now he's got a pup."

Slim said, "Candy, you can have any one of them pups you want."

Candy did not answer. The silence fell on the room again. It came out of the night and invaded the room.

Why are some people lonelier than others? In his review of the literature of college students, James Ponzetti reports that lonely students attribute their loneliness to character deficits. Whether or not this is true, it creates a self-fulfilling prophecy as they then continue to spend more time alone and become perceived by others as less likeable overall. But why did they become lonely in the first place? Was it stress, fear, insecurity?

Loneliness, so familiar to us all, remains rather hard to explain. There have been many times in my life when I've been quite alone, but not lonely at all. And then others when loneliness has inexplicably entered my body like a sickness. I think, in part, my own loneliness stems from times when I am not sure where my life is going. Instability makes me feel lonely and isolated.

Does modern society provoke increased loneliness? In an article about the loneliness of widows, Helena Lopata writes about how there has been a fracturing of family in modern society. Extended family now means only a handful of people, and each nuclear family is expected to grow and exist as an independent unit. I was taking a walk around my parents' neighborhood the other evening. It was a warm early fall night and many kids were out on their lawns playing baseball or soccer or tag. I smelled several cookouts and walked by parents with strollers or young couples walking the dog. It was quite a nice picture, but something seemed off. I couldn't figure out what it was until I was home later and began thinking about my own childhood. Growing up, there lived two sets of older couples across the street from us -- the Williams and the Parks. Next door, there was a couple who weren't quite as old, but their kids were mostly grown up and moved out so they seemed to me to be in a different stage of life too. The Williams and the Parks were quite involved in the neighborhood. We knew them, could go ask for an extra egg for baking, and often played in their lawns and on their driveways. They lived in these houses most of their lives, until the very end, I think, when they couldn't take care of themselves anymore.

And this is what struck me. Where are the old people? There are not any older couples living in my parents' neighborhood anymore, except perhaps them. But they do not bring cookies to the kids down the street or really know any of them. Whereas retirement homes used to be places to go to die, they are now places of community and events, often tied in to universities such as Kendal at Hanover which gives residents access to Dartmouth College resources. This is all well and good, but it makes neighborhoods more sterile, less interesting places to live... and lonelier in some ways. I can attest to a feeling of comfort at knowing that the Williams and the Parks lived across the street when I was a child. I don't know why I felt this way. Perhaps it had to do with the sense that there existed a broad and long-lived community -- from birth to death. I also had this feeling that they knew things that my parents didn't and could answer different questions for me.

People sometimes say we are alone at birth and we die alone. Isn't this completely incorrect, though? Tell me, who is alone at birth? Even if the father is not present at delivery, the mother will most certainly be. That is far from being alone. The first thing that babies experience is being placed in their mother's waiting arms. Technically, they were more alone in the womb. Dying alone... well that seems fairly common. And even if one has friends and family present, he is entering a place of complete loneliness or utter nothingness... well, I guess that depends on what you believe. The unknown certainly seems lonelier than the familiar, though.

I find it to be a sad truth that many people are lonely in the midst of what seem to be intimate relationships. Couples who have either grown apart or stopped trying. Younger couples who feel isolated when conflict arises and they markedly and uncompromisingly disagree. This is the most painful loneliness of all. This is supposed to be the person who knows you the best, or at least tries to understand you more than others. The person who feels empathy for you. The person who shares with you and with whom you share in return. The person who expresses interest in your interests, even when they are quite foreign to him. But he makes an effort, because he loves you.


Again a Solstice
by Jennifer Chang

It is not good to think
of everything as a mistake. I asked
for bacon in my sandwich, and then

I asked for more. Mistake.
I told you the truth about my scar:

I did not use a knife. I lied
about what he did to my faith
in loneliness. Both mistakes.

That there is always a you. Mistake.
Faith in loneliness, my mother proclaimed,

is faith in self. My instinct, a poor polaris.
Not a mistake is the blue boredom
of a summer lake. O mud, sun, and algae!

We swim in glittering murk.
I tread, you tread. There are children

testing the deep end, shriek and stroke,
the lifeguard perilously close to diving.
I tried diving once. I dove like a brick.

It was a mistake to ask the $30 prophet
for a $20 prophecy. A mistake to believe.

I was young and broke. I swam
in a stolen reservoir, not even a lake.
Her prophesy: from my vagrant exertion

I'll die at 42. Our dog totters across the lake,
kicks the ripple. I tread, you tread.

What does it even mean to write a poem?
It means today
I'm correcting my mistakes.

It means I don't want to be lonely.

Email ThisBlogThis!Share to TwitterShare to FacebookShare to Pinterest
Labels: loneliness, of mice and men